November 14th was a ‘Day for Respect’ in the Netherlands, supposedly intended to bring awareness on topics as integration, minorities, and ethnocentrism to the masses. Especially our school kids are important and willing masses, so the Dutch government issued a book on respect to be developed and used for school kids aged 11 and 12. In principle a laudable initiative (perhaps a little naive), but it turned out really ugly. Member of parliament Geert Wilders, leader of a rather right-wing political party which is especially negative about Islam, was furious. But, as heated debates go, not everything was mentioned. Let’s have a look: 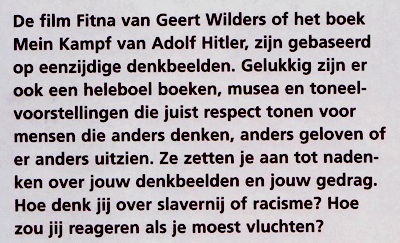 The little books reads (in Dutch):

Loosely translated to English, it says the following:

Geert Wilders’ movie Fitna and Adolf Hitler’s Mein Kampf are based on singleminded ideas. Fortunately, there are also many books, museums, and plays that do pay respect to people who think differently, believe differently, or look different. These provoke thought about your own ideas and behaviour. Hoe do you think about slavery or racism? How would you react when you’d have to flee?

Of course, the (implicit?) comparison between the movie ‘Fitna’ and the book ‘Mein Kampf’ is wrong. Sure, both have exclusionistic aspects, but it’s like comparing the Holocaust to some serious swearing at a person. I can easily see how people are upset about how this is what school-children are supposed to read. This cannot continue and Geert Wilders deserves an apology.

But, people tend only to read the first two sentences. I would like to invite you to read the rest. To me, the whole text does not seem to be written very cleverly. Think about it: how would you feel when you had to read this, when you are such a person that thinks, believes, or acts differently (pun intended)? Now it is official: you are the ‘different’ person. Tell that to a school kid (aged 11 or 12) in a classroom of fellow pupils who apparently are normal.

Does the word ‘stigma’ come to mind? To me it does, and I cannot understand how someone can write such a schoolbook. This little text is, despite different intentions, just as singleminded as the book and movie it criticizes.