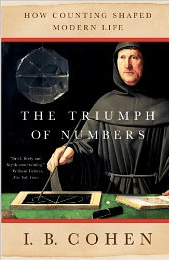 My new job involves working with numbers. A lot. So, I started reading about using numbers, and I very much enjoyed ‘The Triumph of Numbers’ by I.B. Cohen (2005). This book gives an historical account not only of how numbers were used in different times, but also of ‘how counting shaped modern life’.

The books starts out by illustrating the power of numbers. Just by using very simple calculations, Cohen quickly arrives at the conclusion that the building of the ancient pyramids involved placing one giant block of stone in the structure, every two minutes. Since the weight of such stones is enormous, this required quite advanced techniques to achieve. Knowing the vast size of such an operation, this helps us to gain an understanding in how the Egyptians may have done it, and the level of technology available to them.

For long, people have been fascinated by numbers. Cohen’s description of the history of using numbers therefore starts with numerology. The reader is treated with lovely exercises is numerology: it is quite amazing how we can prove about anything, simply by reordering numbers that somehow correspond to letters. If only there was an empirical basis for such magic.

Off to more serious applications of numbers (by today’s standards), Cohen locates the proper start of using numbers in Hutcheson’s Moral Arithmetic. Hutcheson used formulae (and which are based on numbers) to make his claims about morality. Here, numbers were only used to illustrate a claim, but not much later people started to relate such numbers to observable phenomena. An example of this Benjamin Franklin, who used his mathematical genius to find arguments based on numbers for his political claims regarding the safety of inoculation against smallpox. He used numbers to show it was safe to have your children inoculated.

Many more examples are given of how claims were backed up with (increasingly advanced) numbers, and calculations based on these numbers. For instance, Alexandre Louis’s statistics showed the ineffectiveness of blood-letting in treating patients. Laplace used probability theory to suggest improvements to both the British and the French judicial system. Guerry was struck by the regularities he found in his tables on crime. Quetelet, referred to as the ‘powerhouse of the statistical movement’, introduced the ‘average man’. He explicitly started using statistics to gain an understanding of society. Quetelet is seen as the founder of statistically based sociology.

What did I learn

I think that the central claim of the book is that statistics became interesting when society became more complex. Especially in warfare, knowing how many troops one has, and can expect in the coming years, provides key insights in military strength. Unsurprisingly, the results of early censuses were highly confidential, not to give the opponents the benefit of the information. From a sociological perspective, this insight allows the rise of the use of statistics to be understood from an evolutionary perspective: the fundaments of societies change, and so does the way people think, as a result of that.

Florence Nightingale: the lady with the numbers

I was especially intrigued by Cohen spending a complete chapter on Florence Nightingale. As early readers of this blog may know, I used to be in the nursing profession myself, and was inspired by how she and her ideas was a strong force behind the movement towards a professional nursing practice. Of course, Nightingale has saved many lives during the Crimean Wars, ‘simply’ by improving sanitary and hygienic conditions in the war hospitals. Later, she improved these conditions in other hospitals, saving many more.

What I didn’t knwo about Nightingale, is that she greatly admired Quetelet. Cohen acclaims her not by inventing new statistics, but by using them appropriately in a time when such use was not common at all. By recording causes of death, Nightingale found that many soldiers died from infections, rather than war wounds. Also, using these records, she was able to show the results of the sanitary and hygienic changes she made. In that, she was a very early proponent of evidence based medicine.

Unfortunately, the book seems to come to an abrupt ending after Florence Nightingale’s interest in statistics is described. As a result of this, only the distant history of statistics is dealt with in this book, whereas the introduction seems to hint at more recent developments in the use of numbers as well. Since the book was published after his death in 2003, I suspect that Cohen has been unable to finish his work. Despite this abrupt ending, however, I think the book is a very nice introduction to the history of using numbers, and provides an insightful overview of many of those in history who have contributed to the modern applications of statistics.

– – — — —– ——–
This post is part of my ‘Reading List’. In this series I jot down some thoughts about the books I read and enjoyed. Some posts my give a somewhat balanced overview of a book, others will just focus on some aspects that, for whatever reason, caught my attention. Never are these posts meant as an evaluation or even review of the book. I just like to share some impressions.

An overview of my Reading List is available, which contains both a list of the books that I wrote about, and another list of books I’m planning to read.

View More
What I Learned
Previous