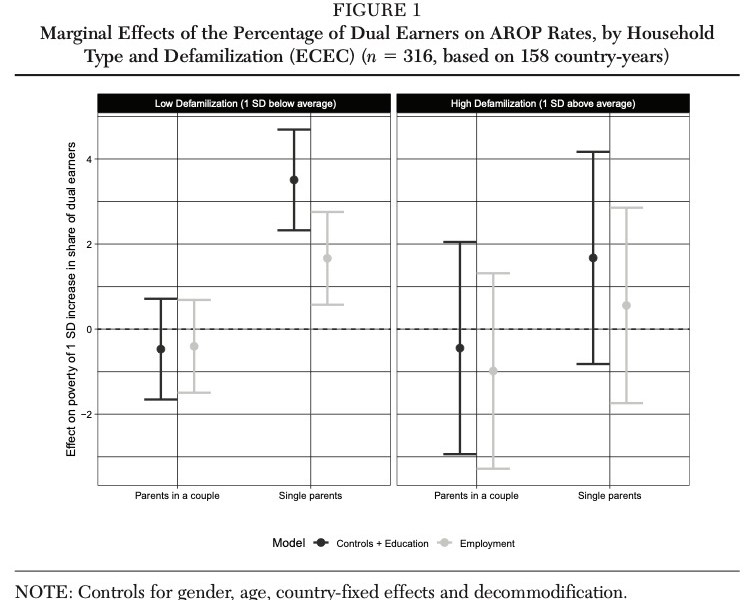 I published a new paper, in The ANNALS of the American Academy of Political and Social Science. It is part of a volume on Public Policy and the Socio-Economic Status of Single-Parent Families: The United States in Cross-National Perspective – edited by Laurie Maldonado, Amanda Sheely, and Janet Gornick.

I demonstrate that single parents in dual-earner societies have more difficulties to keep up with typical incomes, increasing their poverty risks. Extensive #ECEC and #income #protection help to level this playing field.

The Figure above shows the a key finding. In countries with low defamilization (childcare, left panel), a rise of dual-earner households is associated with an increase in poverty among single parents, but not among #couples with children. With more childcare, these associations disappear (right panel).

The same findings are reported for decommodification (income protection).

I think that the relevance of this paper for theory and policy is twofold.

In terms of #theory, the findings are in line with the work challenging that poverty is mostly related to the individual characteristics of the poor. Instead, poverty is relational.

Poverty cannot be solely explained by reference to individuals’ own “socioeconomic background, family composition, and “policy context, but also requires reference to the #economic activity and composition of other households in society.

In terms of policy, supporting high employment rates has long been seen as an effective strategy against poverty. However, the findings show rising employment also represents a displacement in who benefits from employment and who is disadvantaged by the increase in employment of others.

Thus, policies for work-family reconciliation and income protection are particularly important in a dual-earner society, to keep groups that are not—or cannot be—in a dual-earner household from poverty.

The paper is part of a special issue (open access untill the end of the year!), with a great group of authors all focus on single parents.

This Thursday, on 1 December, the launch of this special issue will be underscored with a public event hosted by the Brookings institute, on “A comparative perspective on policies to support single-parent families”