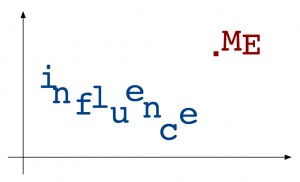 I’m highly excited to announce that influence.ME is now available. Influence.ME is a new software package for R, providing statistical tools for detecting influential data in mixed models. It has been developed by Rense Nieuwenhuis, Ben Pelzer, and Manfred te Grotenhuis. The basic rationale behind identifying influential data is that when iteratively single units are omitted from the data, models based on these data should not produce substantially different estimates. To standardize the assessment of how influential data is, several measures of influence are commonly used, such as DFBETAS and Cook’s Distance.


Mixed effects regression models tend to become common practice in the field of Social Sciences. However, diagnostic tools to evaluate these models lag behind. For instance there is no general applicable tool to check whether all units (or cases) roughly have the same influence on the regression parameters. It is however commonly accepted that tests for influential cases should be performed, especially when estimates are based on a relatively small number of cases. Testing for influence with mixed effects models is especially important in Social Science applications, for two reasons. First, models in the Social Sciences are frequently based on large numbers of individuals while the number of higher level units is often relatively small. Secondly, often the higher level units are remarkably similar, for instance in the case of neighboring countries. Influence.ME is a new package for R which provides two innovations for evaluating influential cases: it extends existing procedures for use with mixed effects models, and it allows to not only search for single influential cases, but for combinations of cases that as a combination exert too much influence.

I plan to use my blog to provide more information about influence.ME. For instance, you can expect some example analyses soon. Other developments, new features, or exciting applications in research papers will be discussed here as well in due time. A static page on influence.ME is available as well, where all important information is collected.

Questions, comments, thoughts, experiences, notes on bugs (and other vermin), feature requests, and what more: it is all highly appreciated. They can be sent by e-mail, or placed in the comments-section on this blog.

View More
useR! 2009 acceptance: presenting influence.ME
Previous
View More
What’s in a name? Dennis the Dentist and Joe the Plumber
Next
%d bloggers like this: