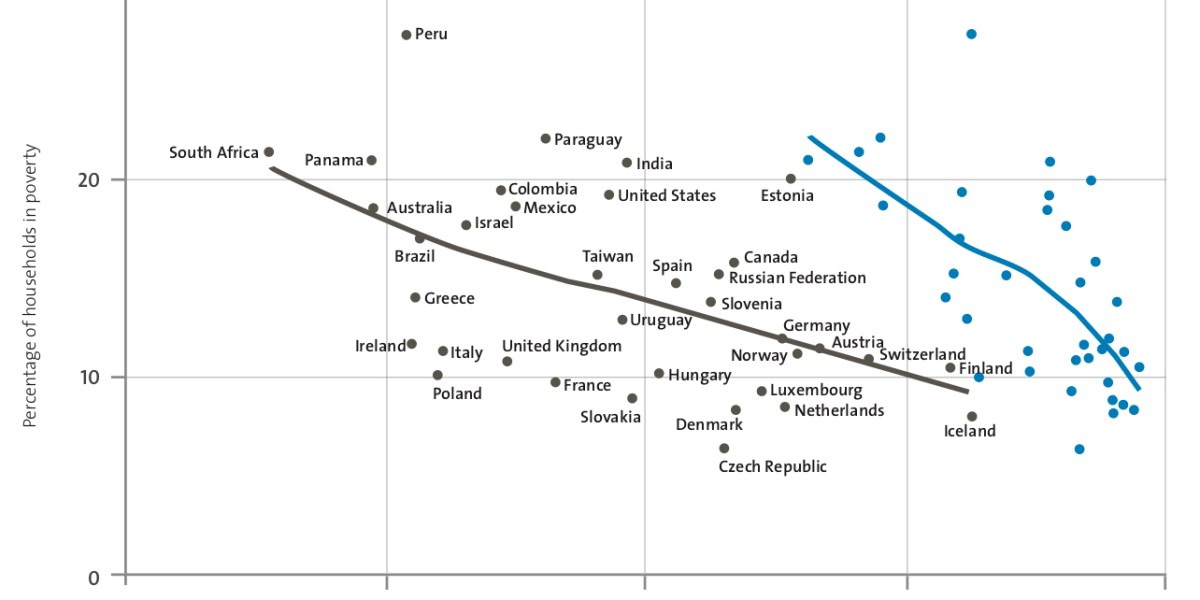 In a recently published paper in UN Women’s discussion paper series, I explore together with Teresa Munzi, Jörg Neugschwender, Heba Omar, and Flaviana Palmisano the link between various aspects of gender equality and relative income poverty. The paper, Gender equality and poverty are intrinsically linked: A contribution to the continued monitoring of selected Sustainable Development Goals, is available for open access download.

This discussion paper provides an updated analysis of gendered economic inequality in high- and middle-income countries. A review of the literature demonstrates that such an analysis needs to explicitly recognize that gender, poverty, and (economic) inequality are intrinsically linked. Specifically, the paper addresses two sets of questions:

Using data from the LIS Database, this paper shows considerable differences among 42 countries with respect to how likely women were to have their own income. The period from 2000 to 2010/2014 saw increasing rates of own incomes as well as women’s incomes constituting larger shares in total household income. A key finding is that, in countries where many women have an income of their own, relative poverty rates are lower.

The comparative analyses, combined with a review of the literature, suggest that welfare state arrangements that support working women not only improve the overall employment rates of women but also help to prevent particularly women in low-income households from living in dependence and instead to have an income of their own—thus reinforcing the potential for poverty reduction. Moreover, institutional contexts that are generally conducive to women’s employment tend to be effective across family forms.

I was a great pleasure to work with the excellent LIS team on this project, and an honour to prepare this report commissioned by UN Women (the United Nations organization dedicated to gender equality and the empowerment of women). This paper was produced for UN Women’s flagship report, “Progress of the World’s Women 2019”.